The Different Types of Gliding
By Andy Palmer

Whilst reading the different articles and reviews on Chesil MFC, in magazines or the web you might have seen words like ‘Slope’, ‘HLG’, ‘Flat Field’ and others. They are all types of gliding, but what are they all and how are they different? This is what this article is here do. It will explain Slope soaring, Hand Launch Gliding (HLG) and Flat Field Gliding

As the name suggests, this kind of gliding involves a slope. When you are slope soaring, you will always need the wind to be coming up the slope. A lot of the time the wind coming up the slope will need to be fairly strong, normally around 15 – 25 mph. But if you have a very light glider for slope soaring, the wind can be as light as 2 – 10 mph. The purpose of the slope is to take the wind that is coming toward the slope and to change its direction into a more upward one. This is what creates updraught. This plays a large part towards helping the glider stay in the air. (The shape of the wing is the other factor) The wind also has to retain some of the forward direction as well, otherwise the glider would just be continually pushed upwards, and there would be very little airflow over the wings. I think Slope soaring is a great way to fly gliders, as there is no problem of having to find a thermal (details later), or the time needed to sort out a winch or tug (details later) to get the glider into the air. But it also has disadvantages, for example windy weather often means cold weather, and standing at the top of a windy, cold hill is not everybody’s idea of fun… It is also very dependent on the wind speed and direction, if the direction changes, or the speed drops, no more flying… 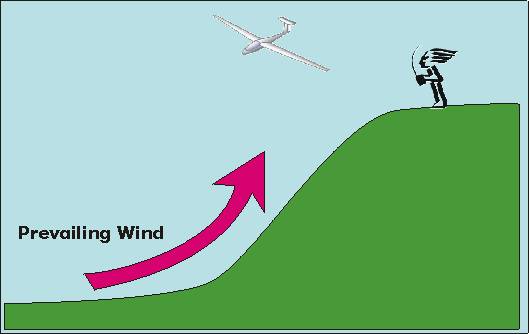 Again, the name speaks for itself. With flat field gliding, you normally start off on a large area of ground and rely on either a winch, or a tug to get you into the air. The winch can be one of three things. Firstly a car battery powering motor, pulling on a cable that starts near you, goes around a tow pulley quite a distance away, and then returns to you. This pulley system allows the plane to start near you so you can launch it by hand. The second type is like the first, but with a pair of people pulling the cable instead of a motor. Harder work, but cheaper! The last type is a powerful petrol or diesel engine taking the place of the electric motor. These have to be permanently situated in one place, but have the advantage of being powerful enough to pull up very large-scale gliders. A Tug is basically a large powerful power plane that is capable of pulling up other aircraft. When the aircraft is pulled up, a towline is used. With a winch, normally just a hook is used to keep the line on the glider, so when the glider is at a certain angle, the line will just pull off. But with a tug, a release mechanism is needed, to allow the glider to take itself off the line at the desired height. Once the glider is in the air, the pilot will fly around looking for thermals. These are warm bubbles of air that rise up after the sun has heated and area of ground more than another area, for example, a dark car park, or a hot sandy beach. When the pilot has found one, he will circle in the thermal to gain height. The alternative to finding thermals is to go to a slope and try to get some lift like in slope soaring. Flat field gliding is more suited to large gliders, because of the stability given when ‘going up the line’.

Hand launch gliding is similar to Flat field gliding in a number of ways. For example, they are both normally done in a wide-open flat space and the planes both rely on thermals and/or slopes to gain height. But there is one major difference, and as you have probably guessed, it’s that hand launch gliders are launched by hand. Also, the models used in hand launch gliding are a lot smaller than the quarter scale gliders used in slope and flat field. There would be a lot of problems if people began to throw quarter scale gliders into the air… The typical size of a hand launch glider is around 1 – 1.5m for the wingspan, and they are made as light as possible. This makes it easier for the glider to stay in the air for the longest time possible, and to easily ride the thermals. Hand launch gliders stay so light by using micro radio gear, and some of the lightest most modern construction techniques. To help the gliders get the most height from a throw, they often have a hole, groove, or launching ‘handle’ for the them to hold when they throw the glider. This means that the glider will go as high as possible, and reach those thermals!

So there you have it, the three main types of gliding. Hopefully this arcticle has helped you learn about gliding and encouraged you to have a go. Just see the contact section of the site to get in touch with a club trainer who will be able to advise you on what to do if you want to start gliding.